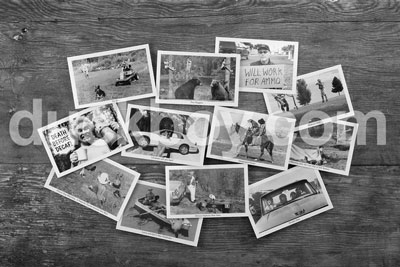 ICONIC humor ‘Redneck Style’ long before it became a fad, Duckboy, Inc. is a Bitterroot Valley of Western Montana company created by Paul Stanton in 1987. Duckboy humor celebrates human quirks and foibles, which range from timeless to contemporary.

Paul Stanton began making scenic black-and-white photos of his native Montana as a teenager, sometimes coloring them with oils. In 1987, Paul and Laurie Stanton founded Duckboy Cards, Inc. after he discovered that his humorous postcards, created as a gag for friends, were much in demand. What started as a personal touch of laughter amongst friends soon became untold chuckles to thousands in over 27 states across the country. And, the “Duckboy Hall of Famers,” who put themselves in every potential nutty situation and scene for their friend, Paul, became legends in their own right!

Customize your postcard, see our products, or just get in contact with us today!

Get your message out with our humorous custom advertising.

Contact our team today to find your perfect product.

Join Our Newsletter! Please fill out your email address below.